Art as a Universal Language, Part 6: Art as Social Change 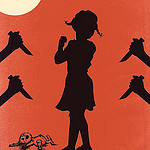 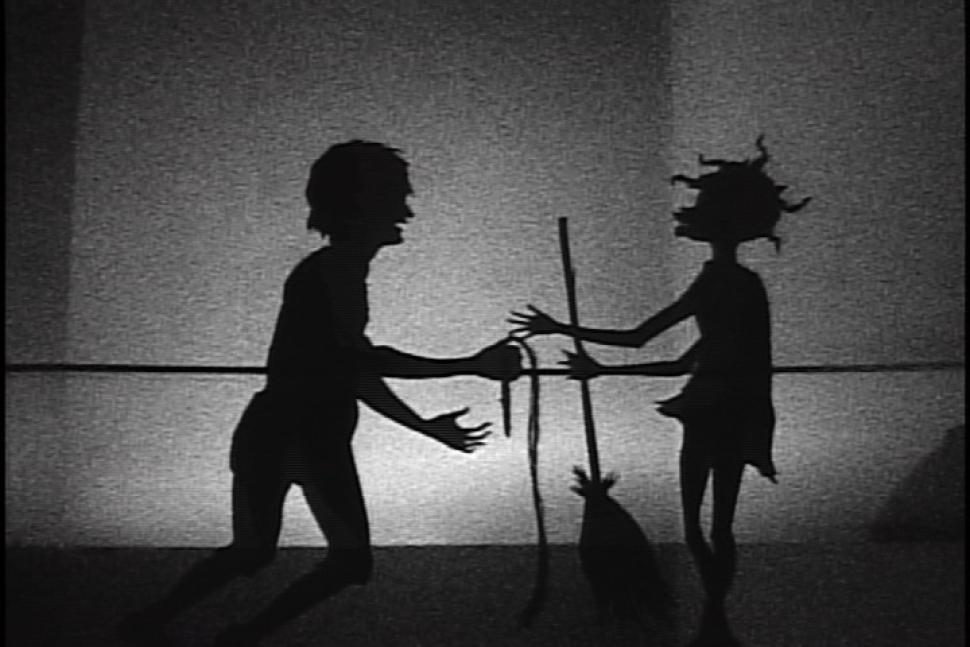 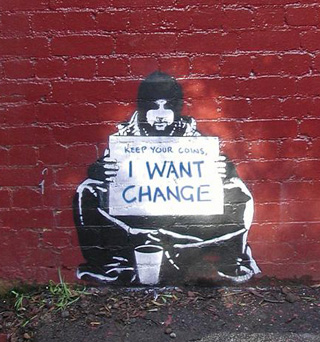 Image by Australian street artist “Meek”,
stencil art of his “Begging for Change”

In previous editions of this blog, I’ve written about the universal symbolic language of art, and visual art as a mode of communication. One of my greatest interests has always been how art can be used to instigate social change.  In the 1980s, I was awarded the Raoul Wallenberg Scholarship to study the Israeli/Palestinian conflict.  Once I arrived to study at Hebrew University in Jerusalem, I realized I wanted to focus my research on how art can direct attention to major social, political, and environmental urgencies. Since the beginning of civilization in Mesopotamia, rulers used art to depict their elevated status and power. Every sight-enabled member of the populace understood that the person depicted largest and closest to the life-giving source of the sun, wielded the greatest influence. The social structure was as simple as powerful=larger; less powerful=smaller.

Likewise, when one group overtakes another, it communicates its power visually, by destroying the most sacred cultural relics of the previous culture and supplanting them with visual symbols that reflect its own ideology.

Roman emperors stole Egyptian obelisks with hieroglyphics boasting of acts of great Egyptian pharoahs.  The Romans erected these obelisks, like cultural hostages, in front of their own most important structures, to show the dominance of Rome over Egypt.  Likewise, when Christianity replaced pagan spirituality in Rome, Christians took this cultural hostage-taking a step further, by sticking a cross on top of the obelisk in front of the Roman Pantheon.  This communicated the ultimate triumph of Christianity, over the pagan religions of the past.  This one image, below, represents repeated cultural “replacement” from c. 1303, B.C.E., to the present day.

Egyptian obelisk from time of Ramses II, in front of Roman Pantheon.

The Taliban’s destruction of the Buddhas in Bamiyan, Isis’s obliteration of great artifacts in Nimrud–these acts of annihilation are acknowledgements of the ability of visual images to communicate messages of cultural significance to humanity.  Destroying them is like wiping out an entire society’s visual language or history.  It is only due to their fear of the power of those spiritual images, that the Taliban and Isis chose to destroy them.  Perhaps it is the power Buddhism gives to the individual for his own self guidance, rather than reliance on an external God, that is so threatening to their oppressive rule. Athena, Goddess of Peace and War, intact in Palmyra 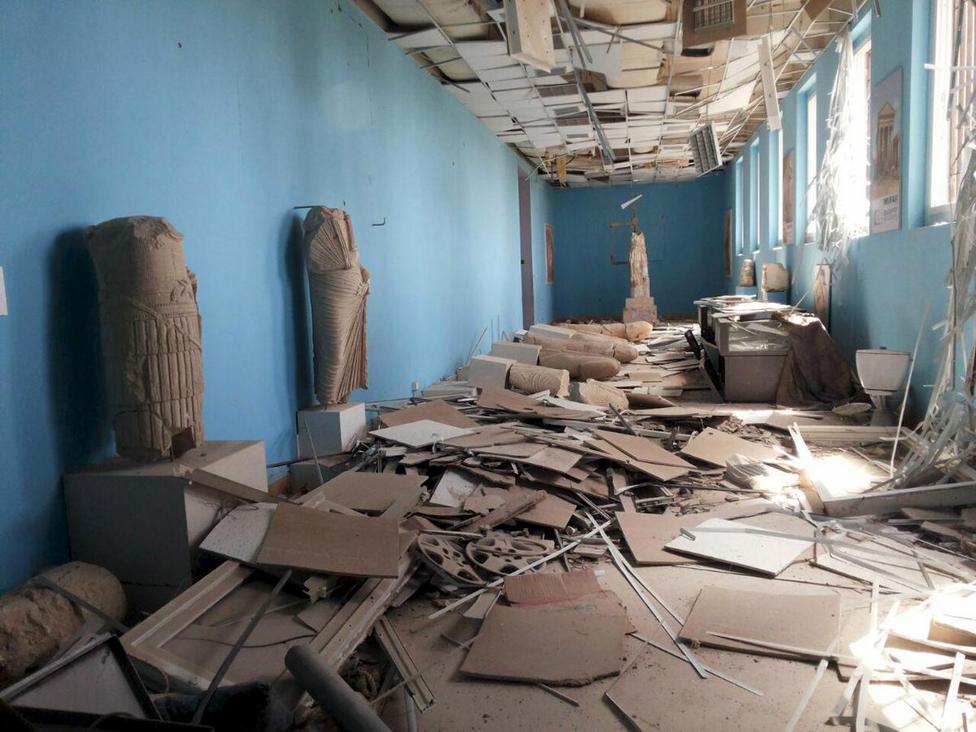 The same Athena sculpture, after Isis destroyed its head and arms, at end of hall

What if, instead of destroying works of art because we fear their ability to convey important cultural truths, we embrace the power of art to help unite turbulent societies?  In our current environment of incredibly oppressive, xenophobic rhetoric, art can, literally, show us a different way.  It can present concept and leave the creativity of solution to each individual viewer. 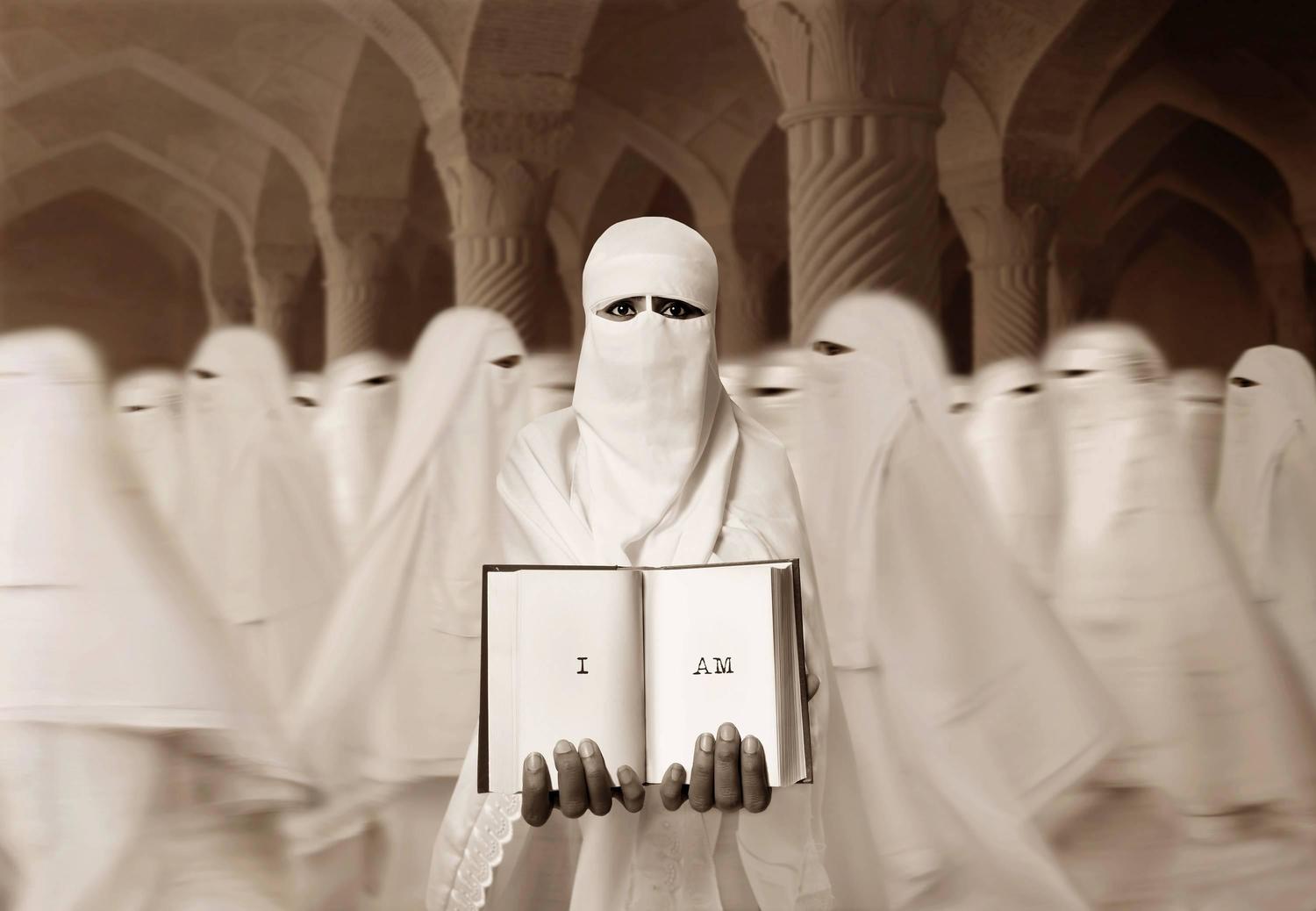 Israeli artist Drew Tal grew up in Israel in the 1960s, when the young country was a mixture of many diverse cultures.  Rather than narrowing his perspective due to religious or political differences, Tal is fascinated by different customs and beliefs.  He uses his photographs to mirror human realities in a neutral manner.  In his “Revelation”, Tal gives the brave words “I Am” to a Muslim woman who could be considered voiceless.  He allows us to perceive her individuality in a sea of imposed homogeneity.  In presenting this unidentifiable woman to us, Tal reminds us that while we are so often inclined to define people by their larger group, every single human being is an individual, with the same mother, father, sister, brother, relationships we use to define ourselves.

The symbolism in Tal’s “Revelation” is dense.  He “reveals” to viewers not only this woman’s individual worth, but he also poetically bridges the abyss of misunderstanding between Muslim and non-Muslim cultures.  “I Am” is a significant statement, appearing in Exodus 3:13–15, when Moses says to God, “If I come to the people of Israel and say to them, ‘The God of your fathers has sent me to you,’ and they ask me, ‘What is his name?’ what shall I say to them?” God said to Moses, “I AM WHO I AM.” And he said, “Say this to the people of Israel, ‘I AM has sent me to you.’” God

In Tal’s “Revelation”, the “I” singles out an individual from the group; the “Am”, refers to the universal, shared divinity in every human being, regardless of political, religious, cultural belief. Tal’s art effects change.

French street artist/photographer, JR, is one of today’s most engaging artists, using his art to help people all over the world make change.  Rather than just creating images for people to ponder, he makes the people themselves into their own art.  JR takes photographs of people in their communities, or has locals photograph themselves, all over the world.  This helps people see that they can literally create their own reality, by rendering themselves as friend or foe within their respective community.   JR won the TED prize (watch his incredible TED talk here). He asked Israeli and Palestinian people to make funny faces, printed monumental images of them, and mixed them together on each side of the wall separating the two areas.  He used his art to magnify our similarities, rather than our differences.  His art opens our eyes to the idea that we can share humor, rather than animosity, even in the face of major differences. 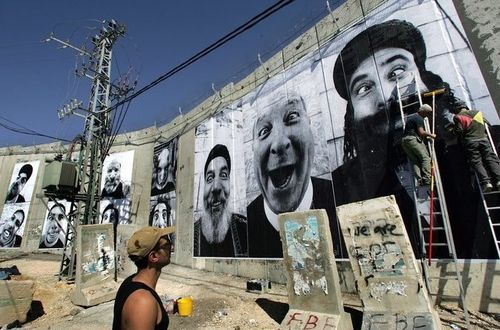 JR’s Inside Out project in Israel

Visual images transcend barriers of specific spoken and written language.  Visual images are universal, touching each human being on a shared somatic level.  Therefore, artists have a unique responsibility to reveal issues we need to confront as a universal human family. By changing the context of these images, visual artists can allow us to “see” a different way forward. Art can, in fact, change the world in a positive way, if we are open to its messages.
~ End of Part 6 ~